The spring Talaria seminar (which may likely be the most memorable to date) occurred on 15 & 16 March. Sheila Varian, Johanna Ullstrom, & Mike Wilson were simply wonderful. They interacted effortlessly, as if they were a touring act that had done this a thousand times (together) before. New Frontiers in Halter Management was the title, and the weekend was devoted to an atypical approach to preparing the horse for the halter ring. Special emphasis was given to starting the young horse, and on encouraging free and charismatic movement in halter classes.

Samantha Mattocks was in attendance representing the well respected British publication, The Arabian Magazine, and has published in-depth coverage of the two-day affair in a three-part article. We are honored that such a magazine of substance and style believes so strongly in this subject matter that they elected to grace their pages over three editions this year, with material from this seminar.

Guests were treated to two days of discussions, demonstrations, presentation of some of the Talaria Farms show string, and terrific plentiful meals prepared and served up by Jane & John in their standard fashion of excellence.

The Talaria staff was on cue and in control of the agenda through-out the entire affair, and we thank them for their tireless passion and excellence in horsemanship.

The balance created by the perspectives of these three seminarians was fascinating and natural. Sheila, through a 30 minute live display of her philosophy (non-intimidating control) applied to a very naïve yearling colt, gained his trust and cooperation, reminding us all just why she has earned the status of a true icon of the Arabian industry. She’s still going strong!

Johanna’s fascinating demonstrations of working with halter horses in hand, teaching them to read body language without being stressed by force and intimidation, had guests taking notes and buzzing. Mike helped to keep the ideas melded nicely, while bringing a “civilized” American perspective to the equation, not just in word but in demonstrations as well.

Samantha Mattocks, editor of the Arabian Magazine, was our guest and scribbled away madly, in an almost futile attempt to keep up with the seminarians, while talented photographer and videographer Susan McAdoo generously and competently captured the weekend with still photos.

Once again, Mother Nature challenged Talaria’s resolve to produce world-class seminars, with dramatic and threatening weather. In January it was snow and brutal cold. This weekend started with terrible storms, winds, and of course the devastating tornado that wreaked havoc in downtown Atlanta.

But still our hearty guests braved the storms–and were rewarded with a weekend that many will likely never forget, and for which the Arabian horse will be better served.

Allison and Curt thank our devoted staff, particularly Kelly, Jose, Heather, Anjelica, and Dana. We thank Sheila, Johanna, and Mike, for their contribution to the success of the weekend as well as to a future with hope. We most importantly thank all of our delightful guests for whom we trust this weekend in some special way, inspired them to look again, perhaps with a slightly different perspective. The energy was inspirational. 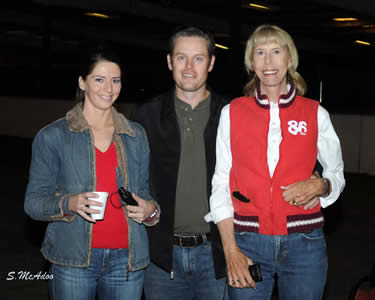